No one understands the message of salvation like Mary, mother of Jesus. She was very humble and grateful for the gift of God. When she heard the greetings of the Angel, she was deeply disturbed, ‘what could this greeting mean’, she wondered within herself. Today many of us claim that we are even the angels. The serpent of old is still working hard to set 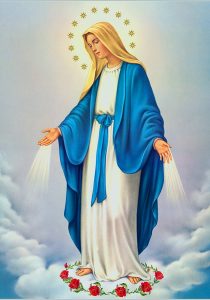 us up against God, trying to fill us with pride and vanity.

As children of Mary, the new Eve, we must fight against the enemy using humility and obedience like our Mother Mary. This is how we can crush the head of the serpent. It was the angel who told Mary not to be afraid, ‘you are so highly favored’, and what did Mary say?, ‘I am the handmaid of God, He has looked on my lowliness’, there was no article of pride or vanity in her.She is the new Eve who brought blessings instead of curses. She was full of humility and obedience. We are meant not just to honor Her but to imitate Her virtues. What we are celebrating is the message of the Angel who said to her, ‘do not be afraid, you have won God’s favor’.

The angel’s greeting to her was, ‘rejoice, so highly favored’. Favor is the same as grace, it is not merit, it is actually what Jesus came into the world to bring. John 1.17. Mary’s response to this grace could be very clearly seen in her response when Elizabeth greeted her, ‘my soul magnifies the Lord…’ The Magnificat of Mary reveals the nature of God Who looks upon the lowly, ‘for He took notice of His lowly servant girl, and from now on all generations will call me blessed.’ Luke 1.48. She became for us therefore what Abraham was for the people of Israel, a source of blessing, for God said to Abraham, ‘I will bless those who bless you’. Genesis 12.3. It equally reveals that God is not gender biased, His blessings and favors are not gender oriented. We see this topic of favor or grace very well in the writings of St. Paul, in the second reading, he was full of blessings to God Who chose us in Christ to make us praise the glory of His grace.

Many people will be very fast to point out the role played by Eve in the fall of humanity, but they will never want to hear that Mary played a role in the salvation of man. Of course it is by grace, Paul himself made a boast of what he had accomplished by the grace of God, ‘but by the grace of God I am what I am, and His grace to me was not without effect. No, I worked harder than all of them-yet not I, but the grace of God that was with me’. 1 Corinthians 15.10. We celebrate the grace of God that has no discrimination, no preferences, no limitations.

It does not follow human logic, this grace can locate anyone anywhere and make him or her a blessing to others. Blessed be God, Who chose us in Christ and adopted us to be victorious.

Mary, Mother of Jesus, pray for us, pray for the Church of your Son and teach us how to win God’s favor and win the prize of life in Jesus name.
Amen