Bishop Of St. George's in Grenada 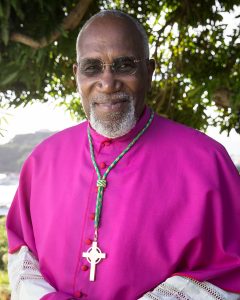 Bishop Fr. Clyde Martin Harvey was born in Port of Spain, Trinidad on November 9, 1948, the son of Lyndon Inniss and Beryl Harvey. He attended Moulton Hall Methodist School and Belmont Boys’ Intermediate RC School, winning a college exhibition to St. Mary’s College in 1960.Here he was an all-round student, representing the college in basketball and public speaking.When the first group of college prefects was chosen, Clyde Harvey was one of them. Later, along with Michael Mansoor and Neil Rolingson he was one of the ‘last of the Greeks’ - the last three students to study Greek at Advanced Level. On finishing college in 1966 he joined the staff of St Mary’s for a short period. He entered the Seminary of St. John Vianney & the Uganda Martyrs in 1967, did his undergraduate studies at UWI in politics and sociology before going onto the Catholic University of Leuven, Belgium. At this the oldest Catholic University in the world, he earned a Master’s Degree in Theology, (magna cum laude), in 1975. He did postgraduate studies at Lancaster University, England, (MA in comparative religion), and also at the Graduate Theological Union, University of California, Pacific School of Religion, Berkeley, USA, where he focused on ethics and comparative religion. Clyde was ordained priest by Archbishop Anthony Pantin on 27th June 1976, a Diocesan priest for the service of the Archdiocese of Port of Spain. Two other young men were ordained with him – Christian Pereira and Carlos Roberts. The three new priests chose as their motto, “To Make Known to Caribbean People the loving-kindness of the Heart of our God”. His first appointment was as lecturer and Vice-Rector of the Regional Seminary of St John Vianney & the Uganda Martyrs and as chaplain of the University of the West Indies, St. Augustine. In 1979, he asked for a parish assignment, and with Fr. Christian Pereira, became co-pastor of the Laventille/Morvant Pastoral Area, where he learnt what Church was really about. Consecrating the Body and Blood of Christ was not only about bread and wine, but fully and truly about people, human beings in joys and anxieties, hopes and fears, all being brought to the altar of the Lord. Subsequent parish assignments were Maloney Gardens, San Fernando and Rosary/St. Martin’s Pastoral Cluster in East Port of Spain. He is currently a senior lecturer in Ethics and Comparative Religion at the Regional Seminary which is an affiliate college of the University of the West Indies. He is well known as a caring and outspoken priest and shepherd, whogets deeply involved in the communities he serves. His comments and responses to social issues are often invited by the media. In 1979 he worked with Lucy Gabriel in founding LIFELINE which has become a hotline helping persons who are suicidal and despairing. He co-founded two HIV support organizations for persons infected with and affected by HIV/AIDS - Community Action Resource (CARe) in north Trinidad, and South AIDS Support based in San Fernando. Since 1993, Fr Harvey has been chair of the Morris Marshall Development Foundation, a community-based NGO which provides educational and personal development opportunities for the people of Laventille. With his appointment as parish priest of Holy Rosary and St Martin’s (in Gonzales) in 2007, came the chairmanship of Community Intervention for Transformation and Empowerment (CIT+E), one of the partner organizations for the Pride in Gonzales Initiative. With this responsibility and as parish priest in East Port of Spain, he has been confronting the decaying social situation of crime and violence. He also took over from Fr. (now Bishop) Jason Gordon, the restoration of what is now the National Shrine of Our Lady of the Holy Rosary, one of the most beautiful churches in the Caribbean. The restored Church, in the midst of what is still a depressed community, stands as a symbol of hope for the whole nation. His assignment as parish priest of Rosary/St. Martin’s ended in October 2016, with him going on a local sabbatical at the Abbey, Mt. St. Benedict. In the run-up to the general elections of 2010, Fr Harvey was named as a Director of the Trinidad and Tobago Debates Commission for the sponsorship of nonpartisan political debates. Two of his most recent projects were the East POS Mentoring Project, which works with boys most at risk in that area, and the Rosary Association of Street Persons, which seeks to help street dwellers find and maintain their dignity. The former is a partnership between the Morris Marshall Development Foundation and the Scottish Free Masons of Trinidad and Tobago. Treasured as a preacher of the Gospel and a friend to the poor and powerless, he is for Catholics and non-Catholics today a comforting presence and sign of hope and promise for our church and society in the Caribbean. In August 2011, he was the recipient of a national award - the Humming Bird Medal (HBM) Gold for religion and community service.Fr Harvey asked that the meaning of the HBM after his name be seen as HUMAN BEINGS MATTER. Fr. Clyde Martin Harvey’s appointment as Bishop of St George’s in Grenada, Carriacou and Petite Martinique, is published in L’Osservatore Romano of June 23rd, the Feast of the Sacred Heart of Jesus. This is of great personal significance to Fr. Clyde since his episcopal motto will continue the motto he shared at ordination with Carlos and Christian-to make known to Grenada and the world the lovingkindness of the heart of Our God - abbreviated on his Episcopal crest to read simply: LOVING KINDNESS.